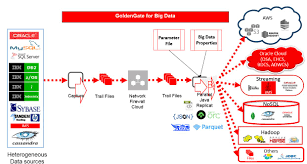 Before performing the upgrade procedure, read the Release Notes for Oracle GoldenGate to determine whether the new release affects the following in your configuration:

Parameters that changed or were deprecated.

Parameters that were added to support a desired new feature or database type.

Parameter default values that have changed.

New data type support that might require changes to TABLE or MAP statements.

Interaction with native database components that might require database change.

You can prevent startup delays that can cause lag by having all of your parameter changes made ahead of time, so that they are ready when you restart the processes. You should not make parameter changes while a process is running, but you can:

Make a copy of the parameter file.

Make edits to the copy.

After you shut down the processes during the upgrade procedure, copy the old parameter file to a new name (to save it as backup).

The change to default SQL-92 rules affects object names in parameter files, input to SQLEXEC clauses, OBEY files, conversion functions, user exits, and commands. You have the following options as a result of this change:

Retain non-SQL-92 quote rules: Oracle GoldenGate retains backward compatibility to enable the retention of current parameter files that do not conform to SQL-92 rules. To retain non-SQL-92 rules, add the NOUSEANSISQLQUOTES parameter to the GLOBALS file before you perform the upgrade and retain that parameter going forward. NOUSEANSISQLQUOTES affects Extract, Replicat, DEFGEN, and GGSCI.

Overview of the convprm Tool

The following describes the convprm tool:

It is a command line program which can be run either manually or scripted.

It recursively converts the files that are included through an OBEY or INCLUDE parameter.

It creates a backup of the initial parameter file in the same directory as the original file. The backup has the name of the original file with the .bck suffix. The creation of a backup file can be disabled when you run the convprm tool.

[ -n ] does NOT create a backup for the file

[ -s ] does NOT display status messages

[-d | --dry-run] does not change the parameter file or create a backup file. It only prints out what would happen as the result of the conversion.

input_files is a list of the parameter files that are to be converted. Separate each file name with a white space, for example:

2.   Examine the parameter file to make certain the conversion         completed successfully. Status messages are displayed at the beginning, during, or at the end of the file conversion process.On errors, the process abends in the same way as other Oracle GoldenGate executables. All error messages that cause the converter to fail are sent to the Oracle GoldenGate error log.

If you are using trigger based DDL support, you must rebuild the DDL objects, even if you plan to use the new trigger less DDL support in an integrated capture. After the upgrade, when Oracle GoldenGate is running successfully again, you can remove the trigger and DDL objects. See Upgrading a Configuration That Includes DDL Support for DDL upgrade considerations.

If you are upgrading multiple Extract processes that operate in a consolidated configuration (many sources to one target), follow the steps provided in Upgrading Oracle GoldenGate Classic Architecture for Oracle Database to upgrade one Extract at a time.

The output trail file is automatically rolled over when the Extract restarts and the integrated Extract version 1 is upgraded to version 2.

Because the time zone is different, you may need to run the ALTER REPLICAT extseqno command to synchronize with newer trail files after consuming the old trail file written by Integrated Extract version 1.

HEARTBEATTABLE is the table for monitoring the status of Goldengate replication.

All Replicat installations should be upgraded at the same time. It is critical to ensure that all trails leading to all Replicat groups on all target systems are processed until empty, according to the upgrade instructions.

The hash calculation used by the @RANGE function to partition data among Replicat processes has been changed. This change is transparent, and no re-partitioning of rows in the parameter files is required, so long as the upgrade is performed as directed in these instructions. To ensure data continuity, make certain to allow all Replicat processes on all systems to finish processing all of the data in their trails before stopping those processes, according to the upgrade instructions. Note that if the Replicat processes are not upgraded all at the same time, or the trails are not cleaned out prior to the upgrade, rows may shift partitions as a result of the new hash method, which may result in collision errors.

The following command can be used for silent upgrade using response file.

WARNING:OUI-10030:You have specified a non-empty directory to install this product. It is recommended to specify either an empty or a non-existent directory.

You may, however, choose to ignore this message if the directory contains Operating System generated files or subdirectories like lost+found. Do you want to proceed with installation in this Oracle Home?