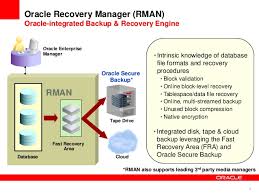 Information in this document applies to any platform.

Getting errors from archivelog file recovering database on one server. The same file was restored to other servers/standby hosts and the log restored and applied successfully. There is only a single standby server where the log fails to apply.

Simply put DD Boost is software that enhances how backup servers and clients interact with a Data Domain backup appliance. It is based on Symantec's OST (Open Storage Technology) protocol, and is a means to extend Data Domain features back to the source.

Does not reproduce without DDBoost.

Events can be set to help identify block corruptions when defining the rman channels. What impact does that have on the backups? Will they take longer? Is this something we should always have on - or just to debug issues?

- From this point onwards, run all backups with event 10466 turned on for the

RMAN channels that are doing the backup. This event turns on additional

corruption detection in the Oracle I/O layers beneath RMAN. The purpose of

the backup process or is occurring subsequent to the backup.

event 10466 enabled for only the RMAN backups, but not for any other

I/O done by this database:

problematic storage. Ideally do validation of every backup immediately

following its creation, and then periodically thereafter.

The completion of the backup indicates that RMAN with event 10466 read each block, validated each and added HARD block bits into each backup similar to cksum in the OS.  If corruption is detected in the RMAN/Oracle areas the backup will fail but if corruption is only detected during validation it occurred after the blocks were passed to the media manager or OS layer.  When the blocks are handed off by Oracle the receiver returns an ack to acknowledge receipt of the blocks sent.  We expect the data sent will be returned so if corruption is detected with the 10466 event set but only during validation the OS vendor or media manager and storage vendors should be engaged.

In this case it was determined to be a hardware failure.  The same archivelogs was restored to 3 separate servers and applied to standby databases and only 1 server showed errors consistently.  That host was taken out of service.